Verb and its Types!

What is a Verb? A verb is a doing word. It expresses some action. In the following examples, the verbs are given in bold font.

In this video verbs and their types are explained briefly with examples. 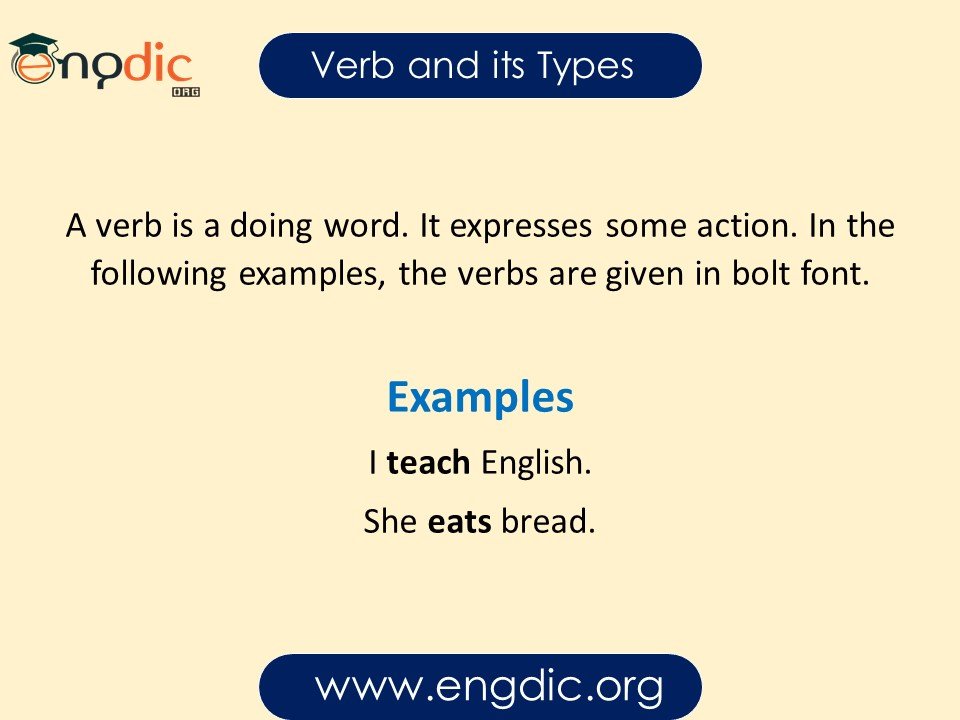 Verb and its types 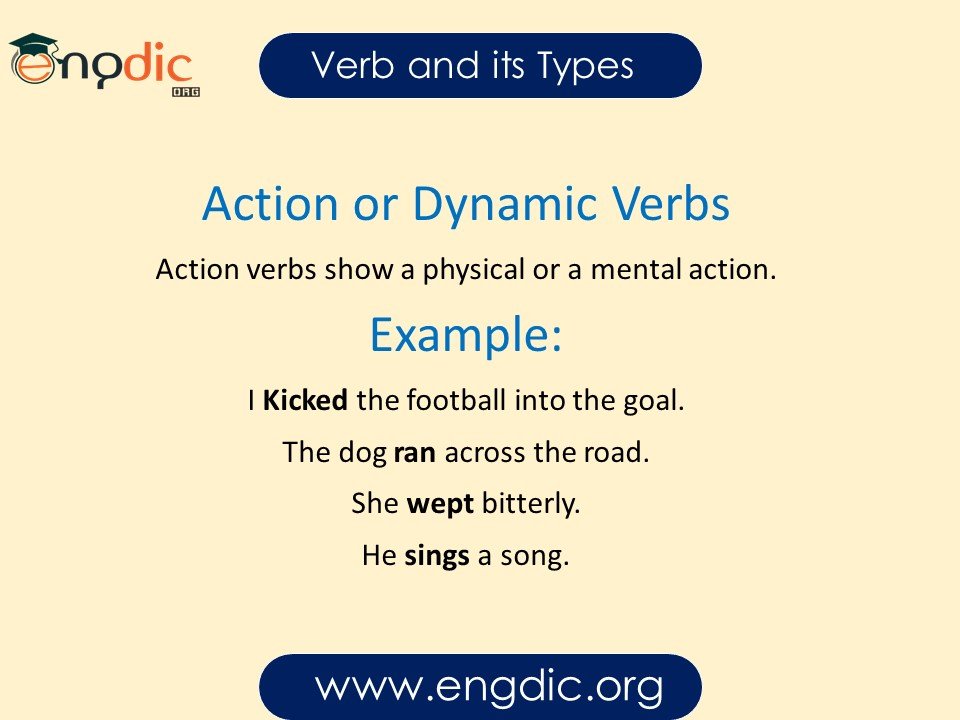 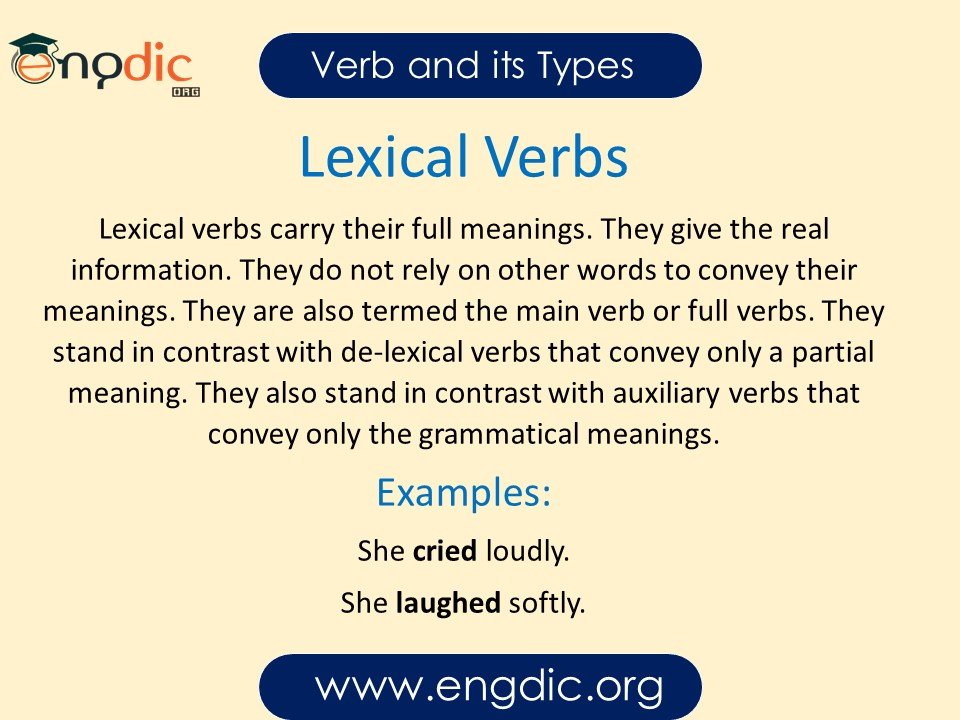 De-lexical verbs have very little meaning of their own. They rely on the following noun to convey clear meanings. Some common de-lexical verbs are: take, make, have, give, etc. 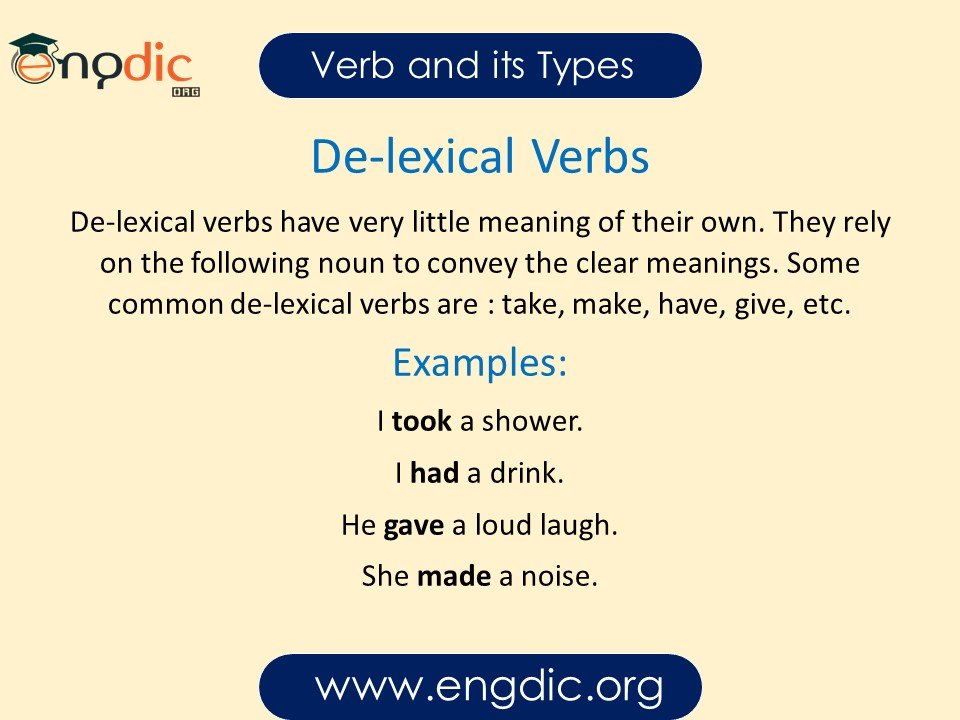 Static verbs describe a state rather than an action. They are not usually used in the present continuous form. A few such verbs are: 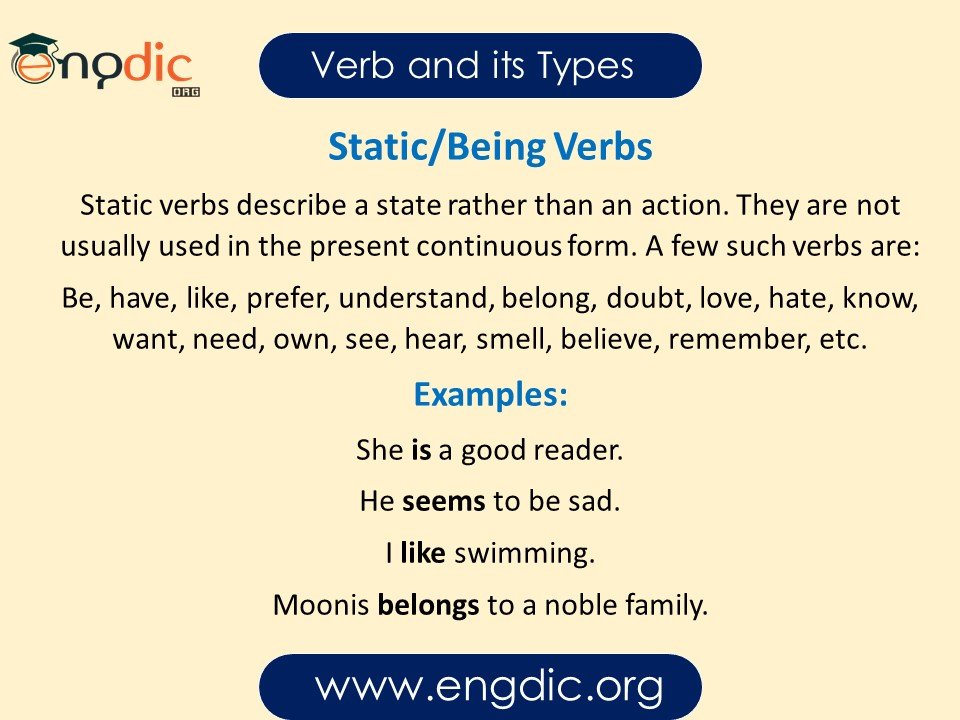 Note: Some verbs can be used both as Stative verbs and action verbs. Some such verbs are: have, think, feel, look, smell, taste.

Non-Continuous verbs are used in continuous form. They are not used in progressive tenses. They are short of Stative verbs. They tell us about some states, not an action. Some such verbs are: 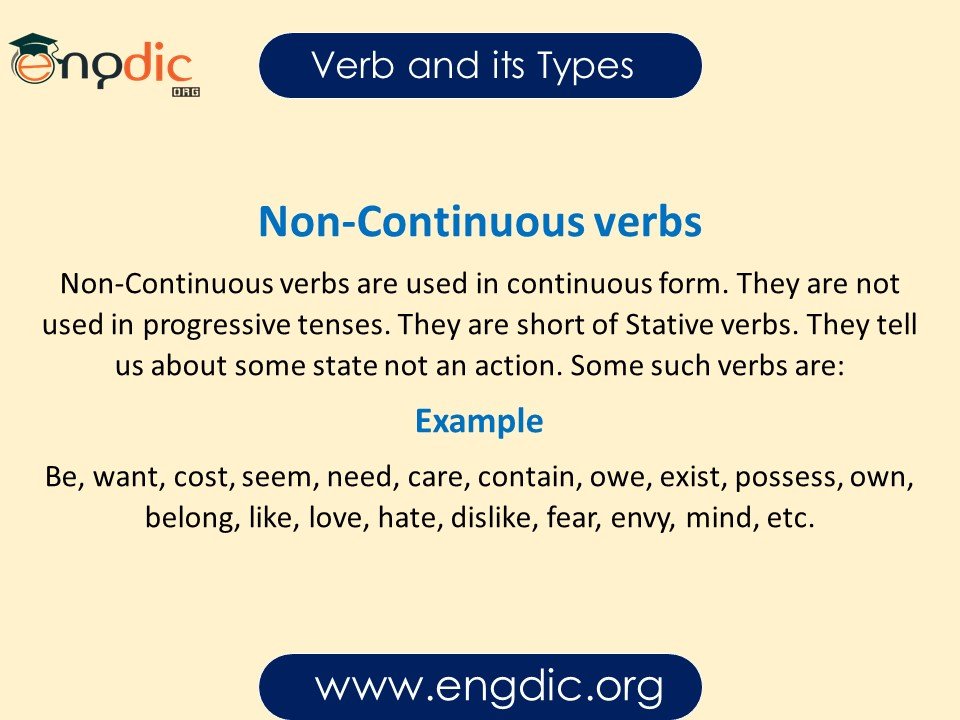 Modal verbs are a kind of helping verbs. They show the mood of a verb such as ability, possibility, obligation, permission, advice, or some other mood.

These verbs always come before the main verb. Modal verbs are can, could, may, might, shall, should, will, would, must, ought to.

A verb that joins the subject to a complement. Here are some common linking verbs: 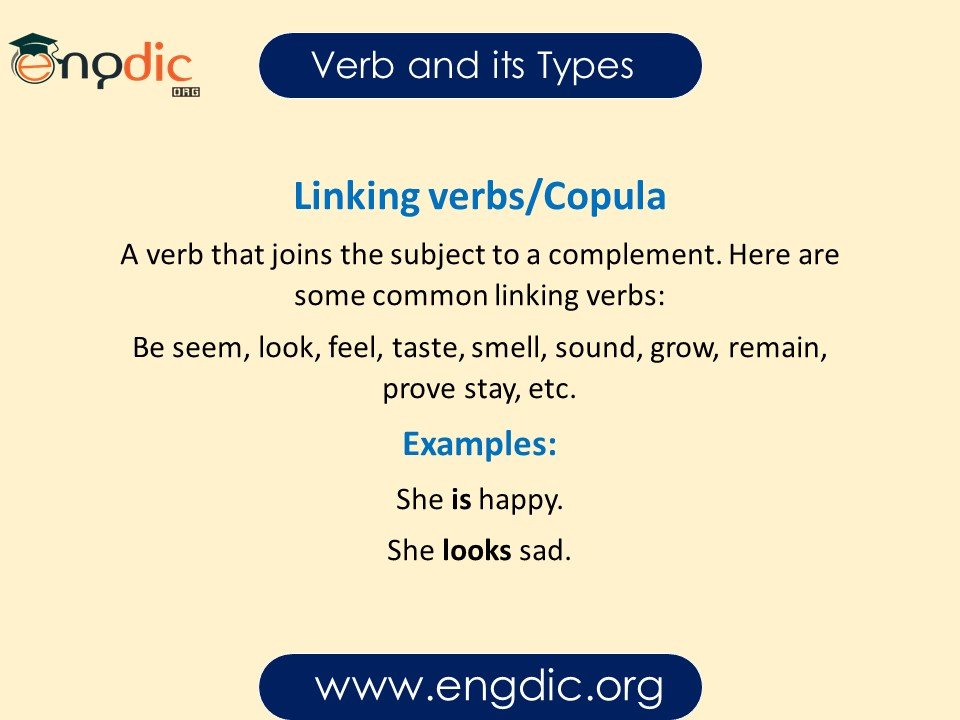 Regular verbs form their past simple and past particle by adding “-ed” to their base form; For example, laugh-laughed-laughed; look-looked-looked.

Examples: Verb and its Types

Irregular Verb forms their past simple and past participle in different ways; for example, buy-bought-bought, eat-ate-eaten.

A verb that takes a direct object is a transitive verb. 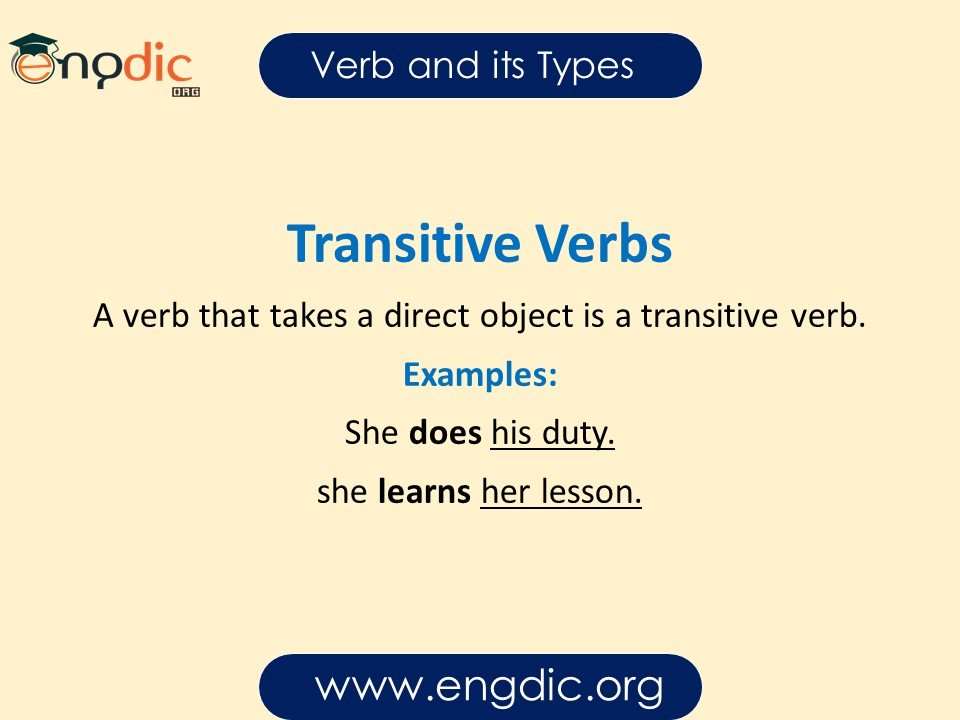 A verb that does not take a direct object is an intransitive verb.

Ergative verbs Verb and its Types

(There is no object in this sentence; therefore, the verb ‘left’ functions as an intransitive verb here.) 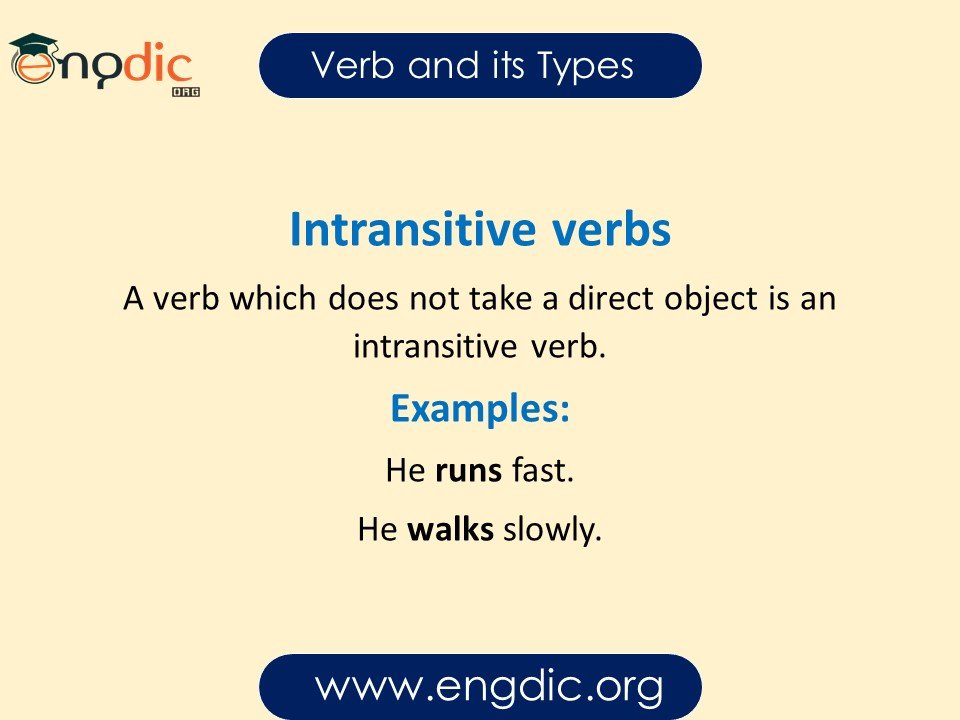 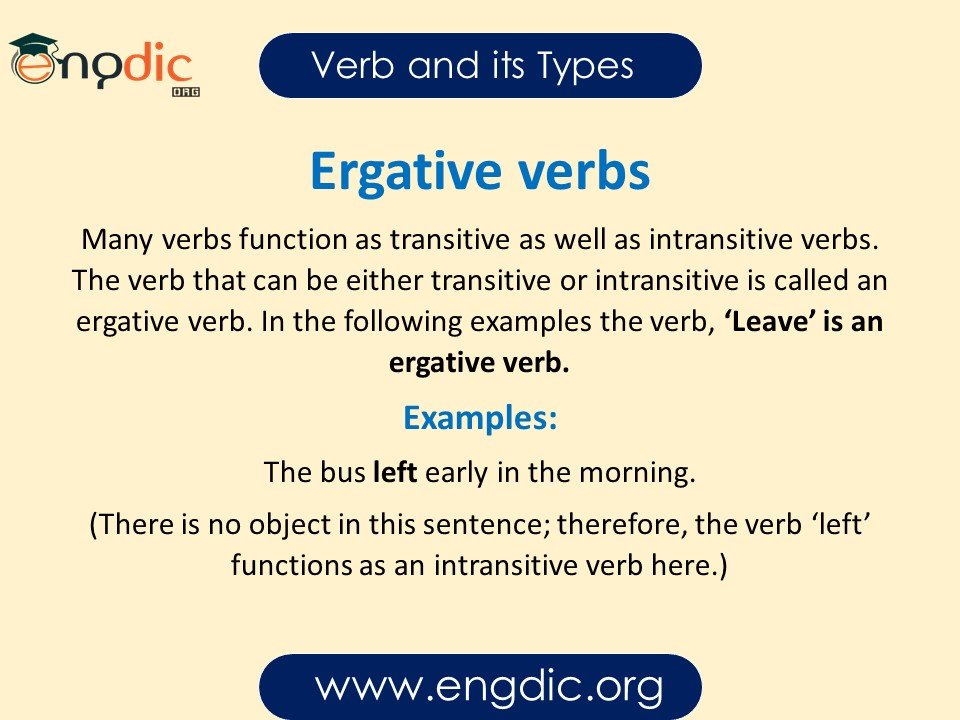 A phrasal verb is a verb followed by a particle. The article could be a preposition or an adverb. It creates a meaning totally different from the original verb. 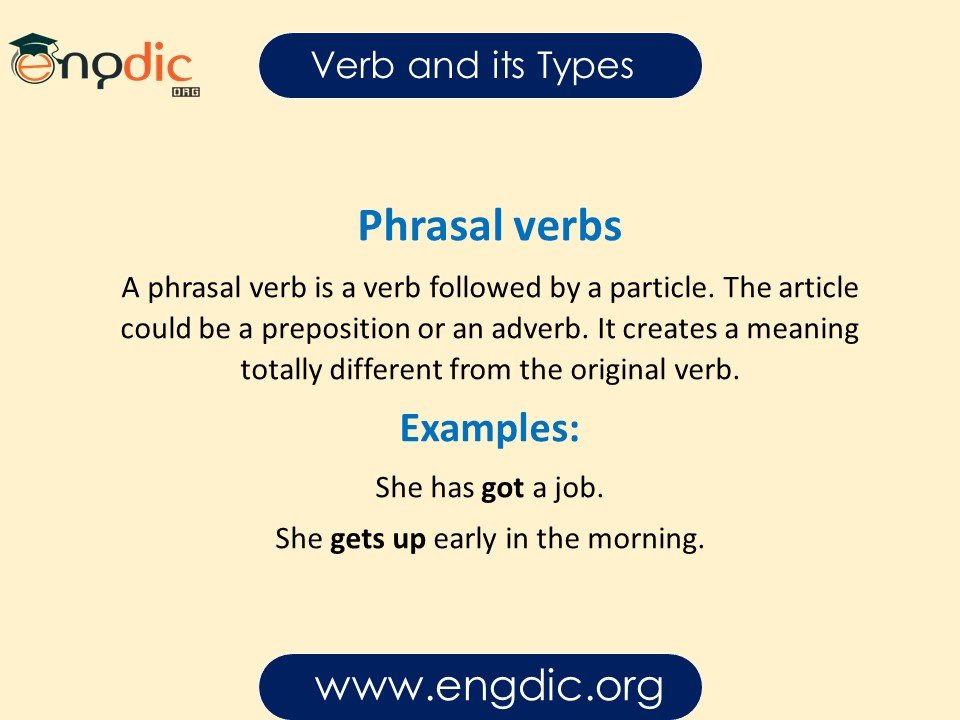 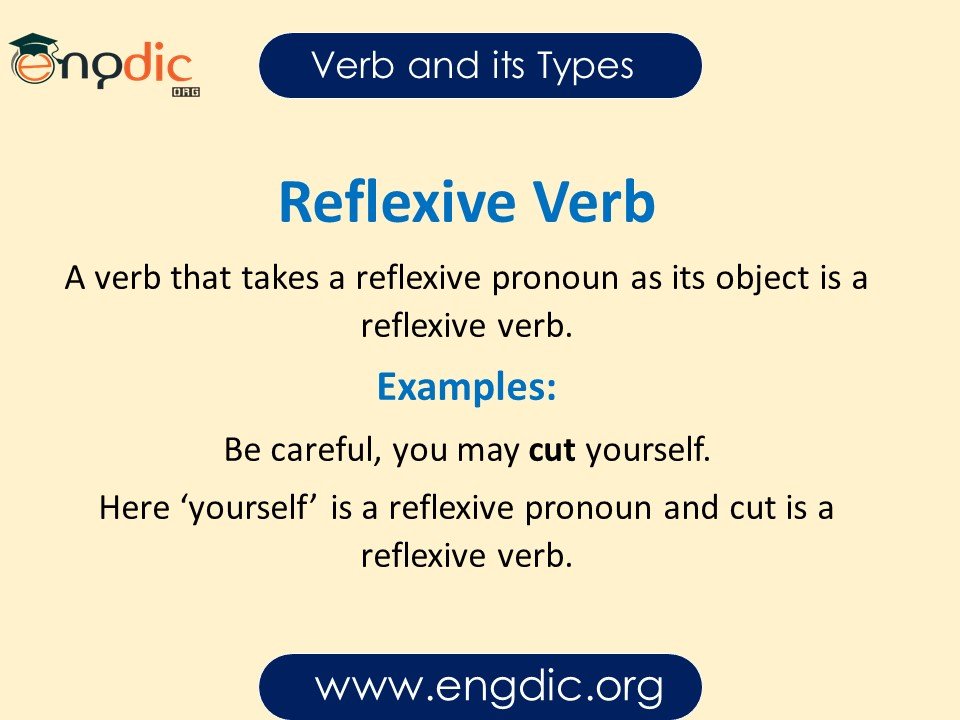 A finite verb must have a subject. It is the main verb in an independent clause or a sentence. Finite verbs give information about gender, person, number, tenses, aspect, mood, and voice.

In English, there can be just one finite verb at the root of each clause; whereas the number of non-finite verbs can reach up to six or even more.

i.e. He is believed to have been asked to get himself medically checked. 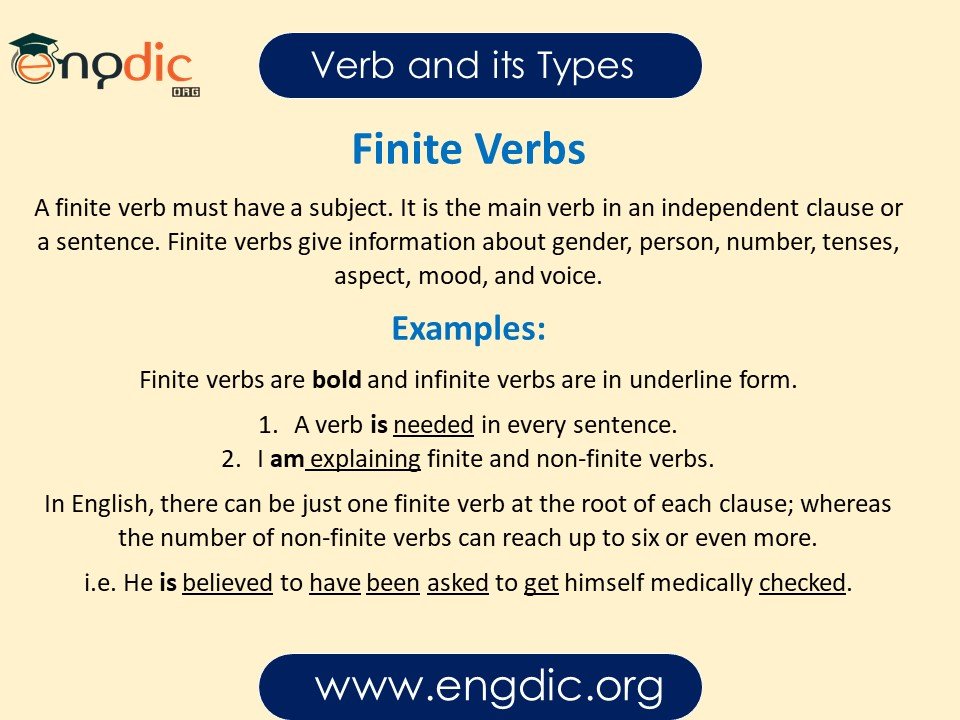 A non-finite verb is also called an infinite verb. It does not have a subject.it does not express tenses or numbers. It cannot be the main verb in an independent clause. Unlike a finite verb, it typically works as an infinitive, participles, and a gerund. 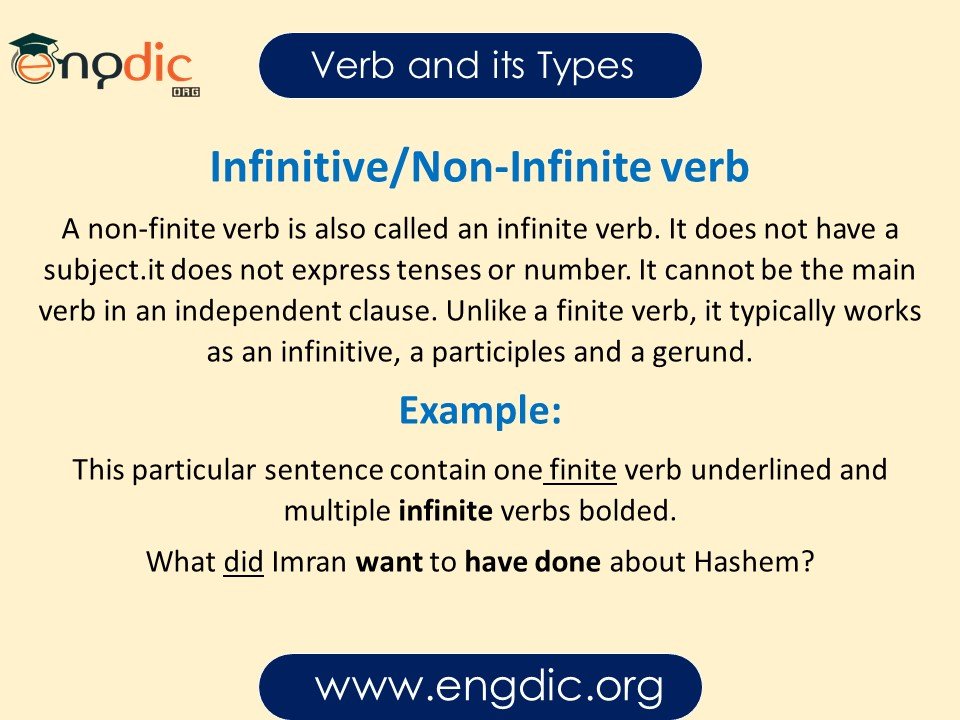 These were the important types of verb after reading this detailed lesson of grammar you must have a knowledge about verb and its types.

Download this Lesson of ” Verbs and its types” in PDF. 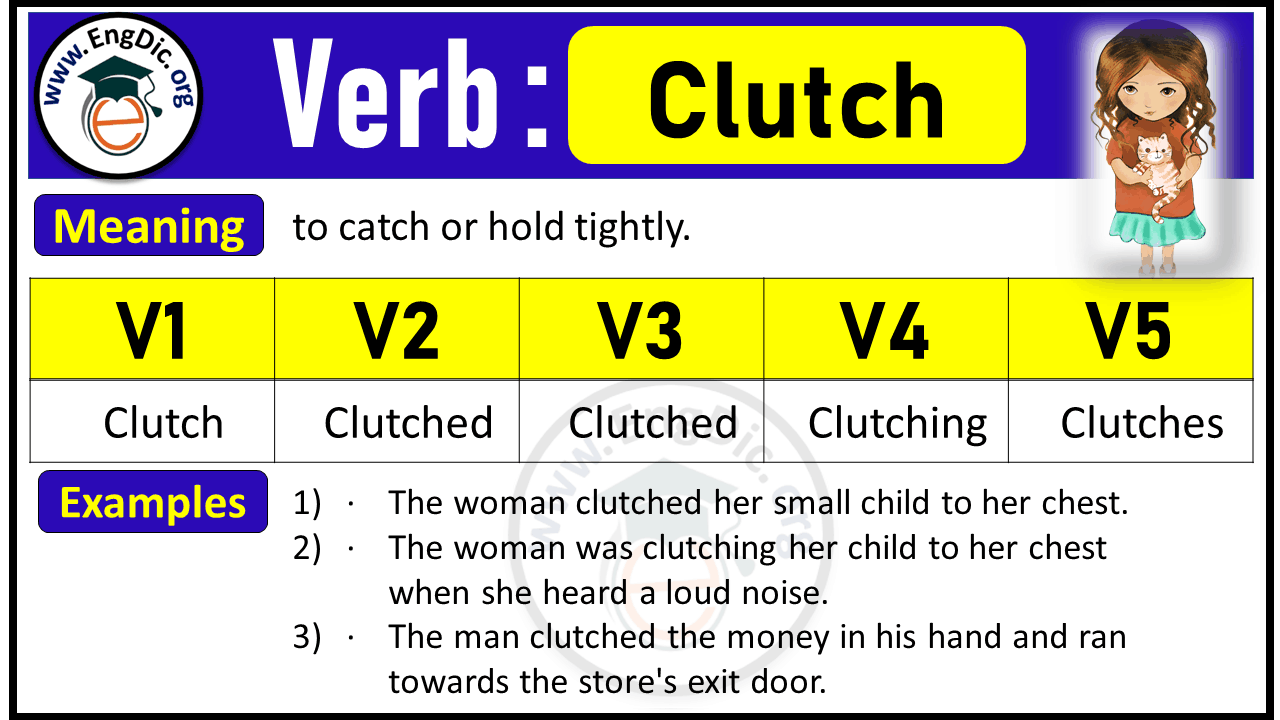 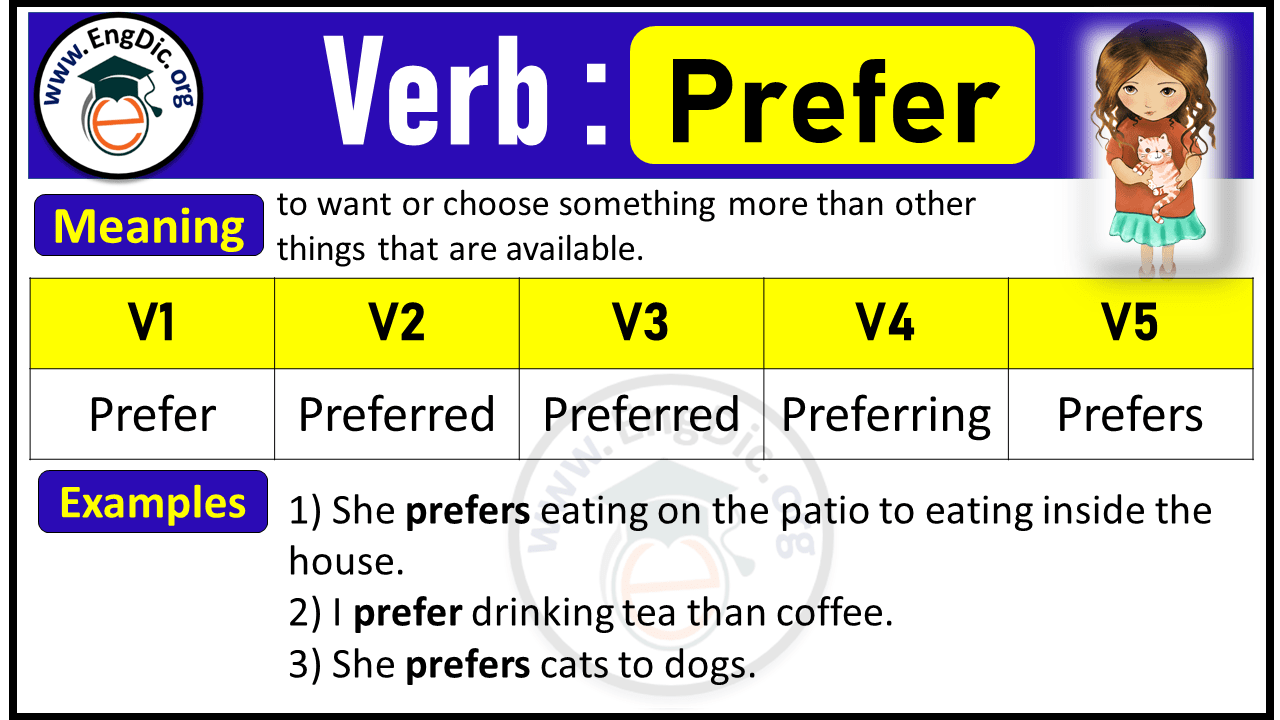 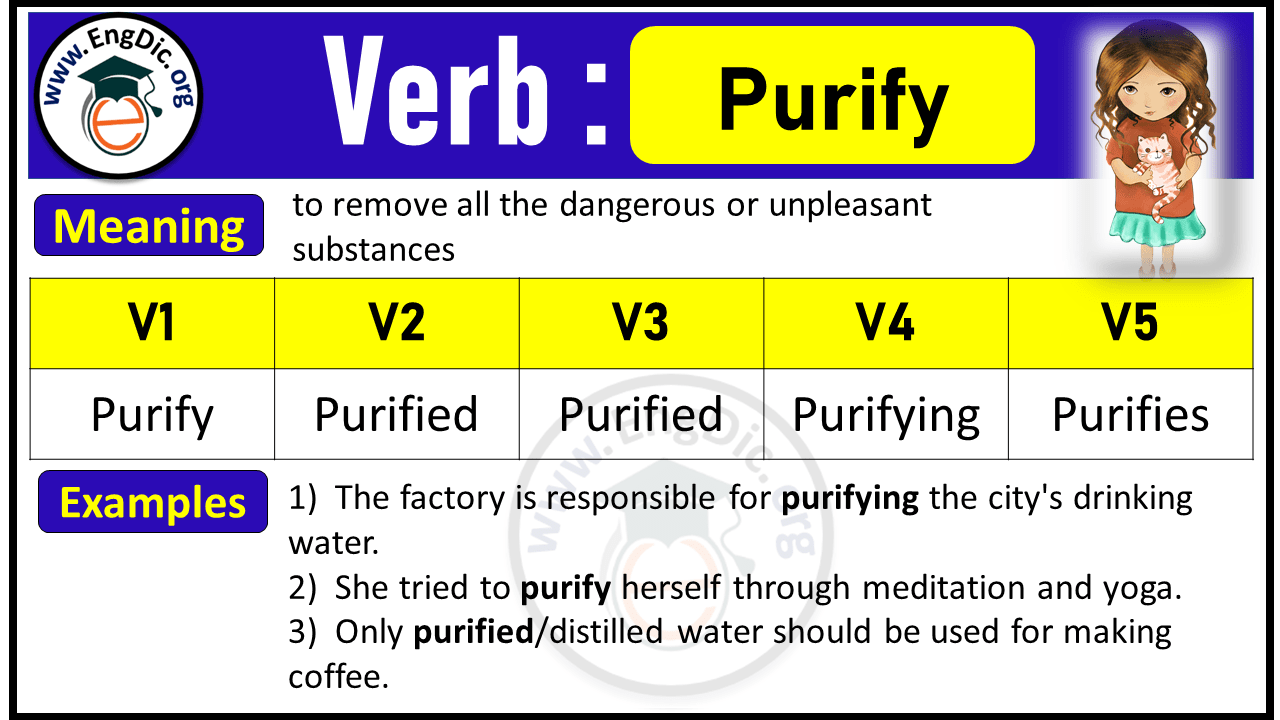 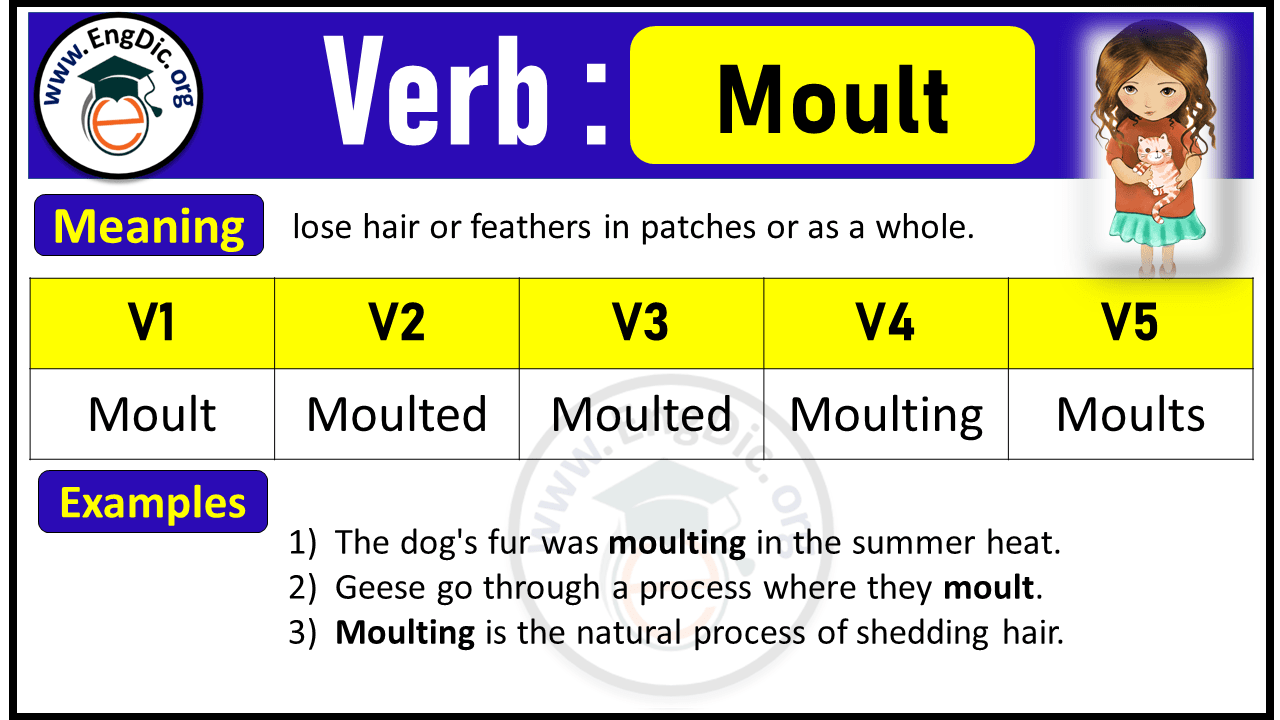 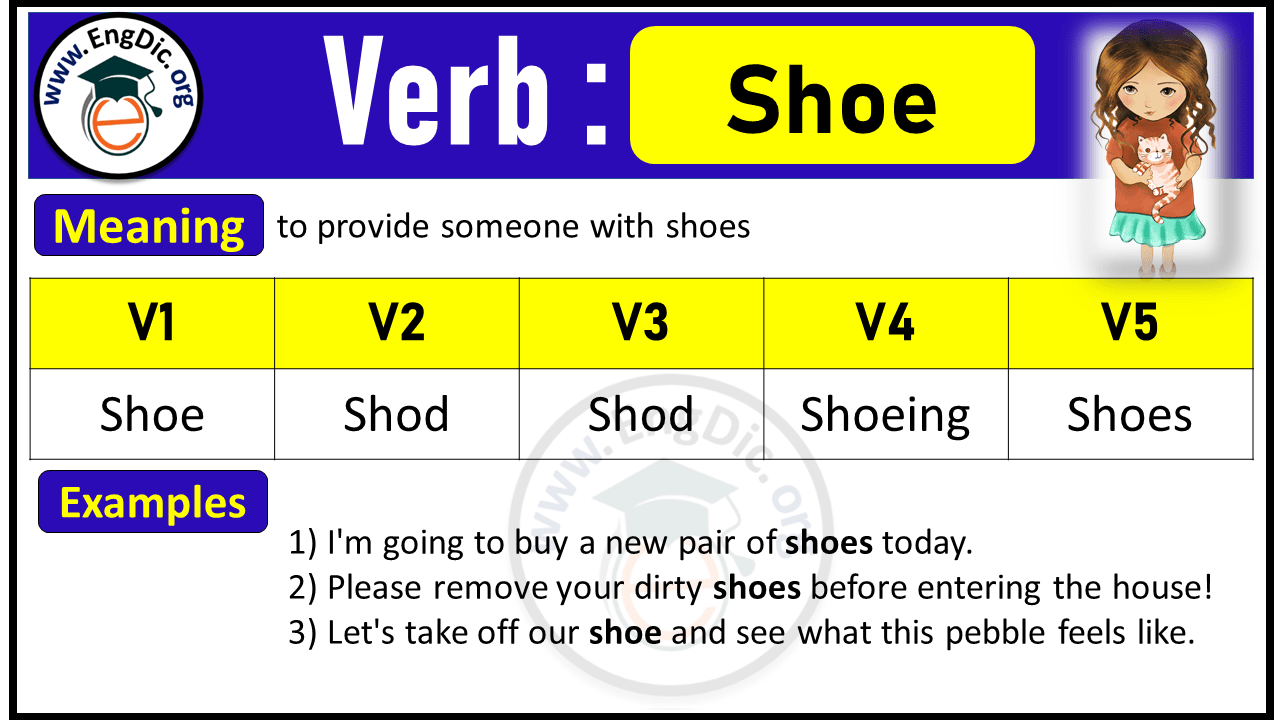 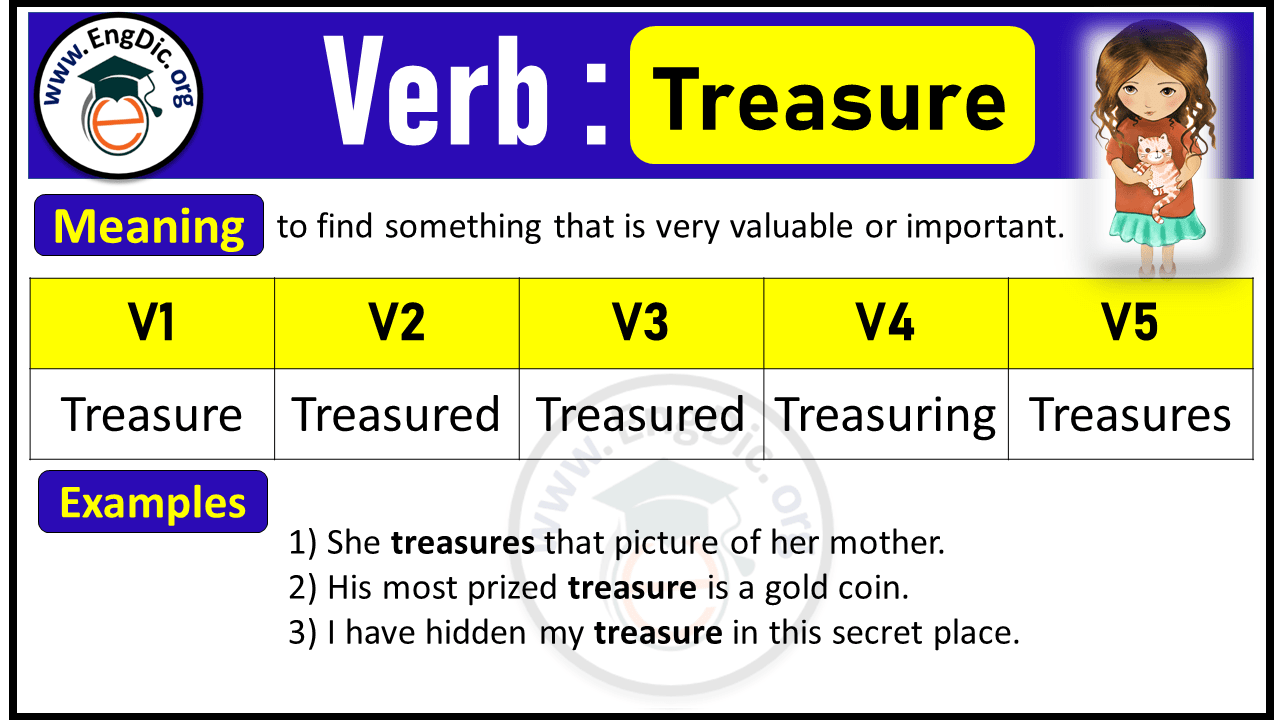