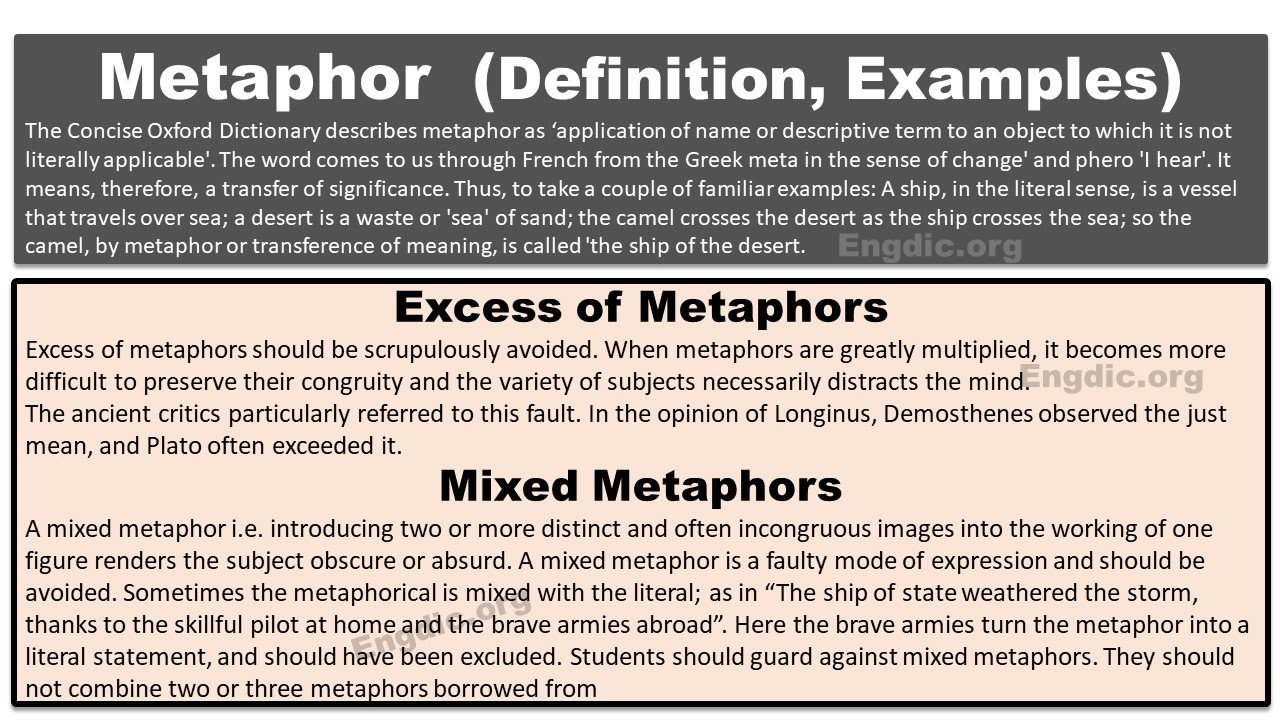 Metaphor in English literature with examples PDF! Here metaphor is defined with most common and daily used examples. In literature these words are of great importance. Metaphor is a figure of speech.

What is Metaphor in English?

The Concise Oxford Dictionary describes metaphor as ‘application of name or descriptive term to an object to which it is not literally applicable’. The word comes to us through French from the Greek meta in the sense of change’ and phero ‘I hear’. It means, therefore, a transfer of significance. Thus, to take a couple of familiar examples: A ship, in the literal sense, is a vessel that travels over sea; a desert is a waste or ‘sea’ of sand; the camel crosses the desert as the ship crosses the sea; so the camel, by metaphor or transference of meaning, is called ‘the ship of the desert.

When Shylock says to Portia:

‘I charge you by the law.

Whereof you are a well-deserving pillar,’

He expresses in metaphor his idea of an upholder of the law by calling Portia ‘a pillar of law’. It will be noted from these two examples that the metaphor is, in effect, a vivid development of the Simile. The Simile says merely that one thing is like another, the metaphor says that one thing is another. The metaphor is an implied comparison without the use of any comparative word; it is the putting of one thing directly for another which it resembles.

Metaphor is so common a figure that often we scarcely realize when we are using it. Many words have both a literal and a metaphorical meaning. Thus, the word light is used in its literal sense in such phrases as ‘by the light of the moon, lhe speed of light, and in its metaphorical sense in ‘The book throws new light upon the subject of philosophy’. In this sentence, the verb throws is also used metaphorically. When we talk about ‘a biting wind,’ the adjective is metaphorical, by metaphor the wind is endowed with teeth and the ability to use them. We use a metaphor when, owing to some resemblance between two subjects or the functions they perform, one is, for the time being, actually identified with the other. It is a figure of speech based on a comparison which is implied in the language rather than directly expressed; as he bridles his tongue; he was a lion in combat. He fought like a lion is a Simile since the comparison is expressed directly by the word ‘like’. In a simile, the comparison is expressed but in a metaphor such words as ‘like’ and ‘as’ are not used. When we say, ‘Man is like a wolf to man’, we use a simile, but when we say, ‘Man is a wolf we employ a metaphor. If instead of comparing things different in kind, we identify them and transfer the name of the one to the other, we have a metaphor e.g. when a crafty man is called ‘a fox’. Here is another example of a metaphor: “The French Revolution was the explosion of a prodigious volcano which scattered its lava over every kingdom”.

Sometimes, the terseness of the metaphor is used, sometimes the more copious simile.

Contrast the two methods applied to one idea in the following: Metaphor: “Nature, a mother kind alike to all,

“As a fond mother, when the day is o’er

Leads by the hand her little child to bed,

Half willing, half reluctant to be led

And leave his broken playthings on the floor;

So Nature deals with us, and takes away of

Our playthings one by one, and by the hand

Leads us to rest.”

Similes and metaphors should be in harmony with the tone of the subjects which they illustrate–not high for humble subjects, not low for subjects of dignity.

A metaphor is used to move by surprise and by its energy and vividness to deepen an impression. You should be careful that your metaphor is natural and appropriate. If it is far-fetched, it will defeat the end in view, either by obscuring the expression or rendering it ridiculous.

Metaphor, alive, fresh, spontaneous, is one of the greatest aids to poetic expression. Blake feels that the insatiate fierceness, cruelty, energy and splendor which are the essence of the tiger’s nature are the essential attributes of fire also. He concentrates all these characteristics in one marvelous metaphor.

Probably the finest single-word metaphor in all literature.

Excess of metaphors should be scrupulously avoided. When metaphors are greatly multiplied, it becomes more difficult to preserve their congruity and the variety of subjects necessarily distracts the mind.

The ancient critics particularly referred to this fault. In the opinion of Longinus, Demosthenes observed the just mean, and Plato often exceeded it.

A mixed metaphor i.e. introducing two or more distinct and often incongruous images into the working of one figure renders the subject obscure or absurd. A mixed metaphor is a faulty mode of expression and should be avoided. Sometimes the metaphorical is mixed with the literal; as in “The ship of state weathered the storm, thanks to the skillful pilot at home and the brave armies abroad”. Here the brave armies turn the metaphor into a literal statement, and should have been excluded. Students should guard against mixed metaphors. They should not combine two or three metaphors borrowed from various sources in the same sentence or phrase. For example, in this sentence, the writer is guilty of mixing metaphors taken from different sources. Unless he wishes to raise a homets’ nest about his ears, he should let sleeping dogs lie. In the first part, the metaphor is drawn from wasps’ and in the second from ‘dogs’. These should not have been intermingled. Again, the writer mixes different metaphors when he says, “We must handle this thoni!y subject carefully, lest we tread on somebody’s toes.” In this sentence, handling a subject has been confused with treading on somebody’s toes. It is right to say: “He poured forth a stream of eloquence.” But it is not right to say: “He poured forth a stream of eloquence that bumt into the hearts of the audience.” In the first part of the sentence, the eloquence is compared to a stream. In the second part, we are told that it bumt. Obviously, the eloquence is being thought of as fire. Mixed metaphors which result from combining unrelated metaphors must be avoided.

The historic utterance of Sir Boyle Roche in the House of Commons may be taken as an instance of a mixed metaphor. “Mr. Speaker, I smell a rat, I see him floating in the air, but mark me, I shall nip him in the bud.” Here the person whose motives Sir Boyle suspected, is likened to a rat, to a cloud, and to a flower at one and the same time.

Other Examples of Mixed or Confused Metaphors:

A torrent of superstition consumed the land. (Here superstition is represented first as water and then as fire).

Hope, the balm of life, darts a ray of light through the thickest gloom. (Here hope is represented first as a medicine and then as a light). The following sentence from Burke’s Present Discontents is an example of mixed metaphors:

“A great deal of the furniture of ancient tyranny is worn to rags; the rest is entirely out of fashion.” If tyranny can be described as furniture at all, no amount of wearing would transform it to rags.